An exciting new collaboration between The Blue Bell Inn Emsworth and Portsmouth brewers Staggeringly Good, ‘Bishop Slayer’ oyster stout (5.6%abv) will be officially launched on Monday 18th December 2017 – and a proportion of the profits will support the Solent Oyster Restoration project! With its strong historical links to oyster fishing, Emsworth is the perfect place to introduce this beer to the drinking public. The landlord of the Blue Bell Inn Emsworth , Giles Babb, took part in the brewing process and the stout will be available in both casks and cans. 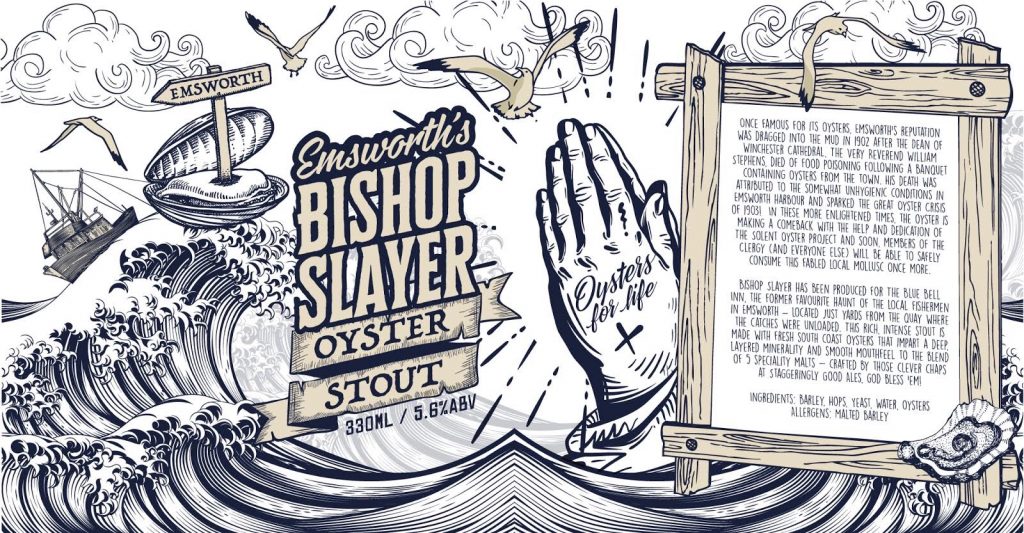 A rich, intense stout made with fresh south coast oysters that impart a deep, layered minerality and smooth mouthfeel to the blend of 5 speciality malts, ‘Bishop Slayer’ is named after an infamous incident in 1902 that dragged Emsworth’s reputation into the mud – the Dean of Winchester Cathedral, The Very Reverend William Stephens, died of food poisoning following a banquet containing oysters from the town! His death was attributed to the somewhat unhygienic conditions in Emsworth harbour at the time and sparked the Great Oyster Crisis of 1903.

However in 2017 the oyster is making a comeback with the help and dedication of The Solent Oyster Project, who are working to restore the native oyster to the Solent; once the largest oyster fishery in Europe in the 1970s and early 80s, it collapsed and was temporarily closed in 2013. This ambitious project aims to reintroduce 5 million oysters to the waterway over the next five years.

The European flat oyster or native oyster is an impressive animal and provides many ecosystem services. They’re capable of filtering 200 litres of water a day, helping to keep our inshore waters clear and more productive while also supporting many species of marine flora and fauna through the habitat they provide and as a source of food. In the UK the population has halved over the last 25 years with overfishing, disease, invasive species and pollution from both land and sea all contributing to the oyster losses; globally an estimated 85% of oyster beds and reef habitats have been lost.

The Solent Oyster Project, formed from a coalition made up of fishermen, marine and local authorities, scientists and conservationists, seeks to significantly increase the population of native oysters in the Solent by 2020.  The restoration of the native oyster will provide wide-ranging ecological and social benefits for the region over the long-term by helping to improve water quality, foster valuable habitats and re-establish an important strand of the economy on the South Coast.

To support this fantastic project and enjoy some amazing beer, the general public will be able to buy cask stout at the Blue Bell Inn, Emsworth and the Wheelwright’s Arms, Havant – plus cans of stout will be available from Vin Wine Merchants Emsworth, Suthwyk Brewhouse Shop Southwick, Stansted Farm Shop, Southbourne Farm Shop and the Beer Musketeer Bottle Shop Southsea. The official launch night in the Blue Bell on Monday 18th December is open to all – come and give it a try!

Pubs For The Jubilee Weekend In Salisbury – Raise A Glass At Deacons !