The Barons Cross is a large detached building situated on a spacious plot. The pub benefits from being located on the busy A44 with passing trade and housing developments nearby.  The pub benefited from a new signage scheme to improve curb-side appeal in 2019. Leominster is a traditional market town located in the heart of Herefordshire, in the beautiful countryside on the England and Wales border. It has a population of around 12,000 however population increases massively over the summer months with visiting tourists enjoying all the town has to offer. 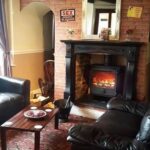 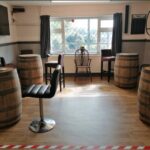 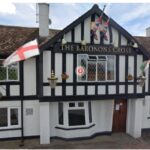 The Barons cross has two entrances one being from the car park to the side of the pub and the other being from the main road. On entering the pub from the front of the premises you are faced with the trading bar which has a fantastic product range and currently serving four cask ales. Throughout the open plan trading area, you have the facility to cater for approximately 25 covers. There is a balance of mixed seating with an eclectic feel along with rustic barrel tables to the rear for vertical drinking. There is a sports area which consists of a pool table, darts board and games machines. The pub benefits from a fully functional catering kitchen that’s situated between the bar. To the rear of the premises, there is a large beer garden which also has a children’s play area. This leads onto an additional area of land which could cater for around ten caravans. There is a side field which can also cater for campers with tents. There is one external shower and toilets and the land has also been used for festival style music events in the past.

Trading Style This is a traditional pub that caters to both local residents of the town and passing trade which increases during the summer months. The pub also benefits from a touring caravan park to the rear of the site which can bring in additional income and associated sales. Trade at the pub benefits is both food and drink led with room to further develop the drinks offer to benefit the wider local community. There has historically been a traditional food offer which has been successful although the new licensee will need to put their own stamp on the food side of the business. There is an opportunity also to introduce teams in the pub such as pool, darts and crib which could tap further into the local market.

Fixtures and Fittings: Upon Valuation  – funding options available for the right licensee.

Training: £250 plus VAT For a breakdown on financial information, please refer to the ‘Additional Info’ tab.

The ideal applicant will either already have a proven track recording in managing a similar style pub or demonstrate the enthusiasm, passion and drive to enable the site to reach it’s full potential. This pub offers a huge opportunity to grow all aspects of the business, whilst at the same time developing further use of the land and caravan park.

Back to Pubs
Menu
Posting....